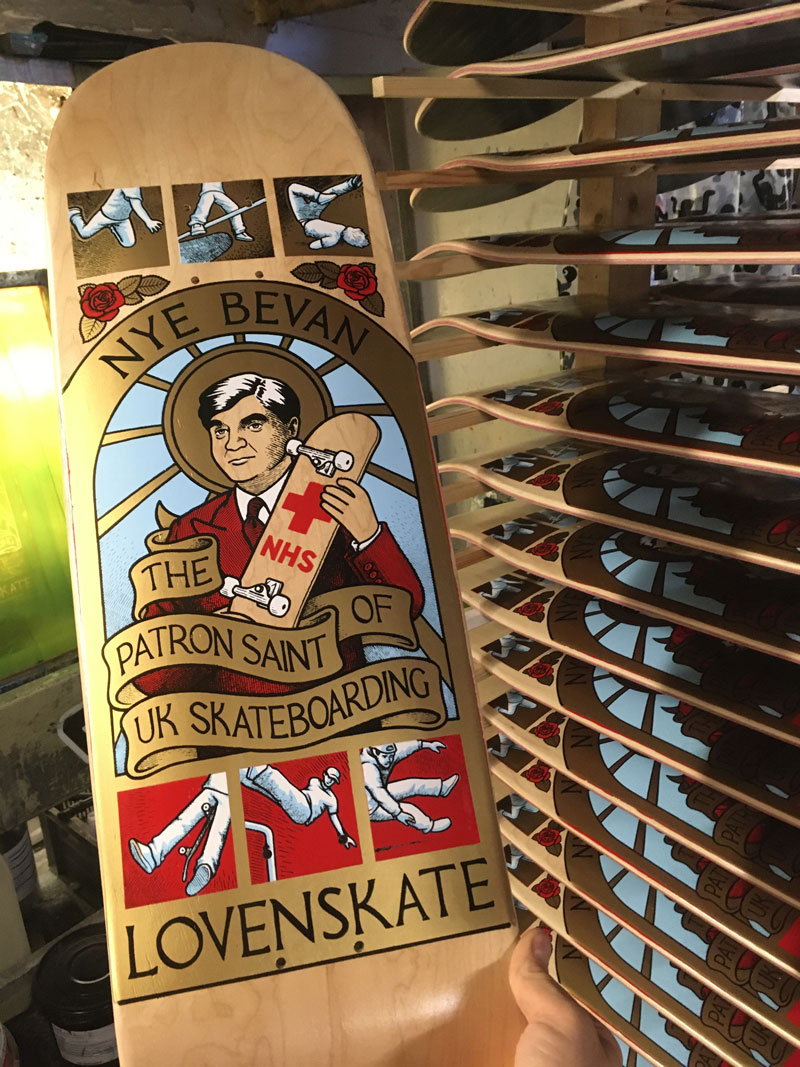 Posted at 21:37h in Interviews, Product by Stuart Smith

The time is nearly upon us, and on Thursday 12th November 2019 the whole of the UK will be voting on the next party to run our Isle. What ever your political leanings, we must all do our best to save a very unique, and very special service, the NHS. We asked our boy Jackson Davis to interview artist Jon Horner on his artwork, his latest board for Lovenskate, and find out why he is so passionate about protecting the National Health Service. 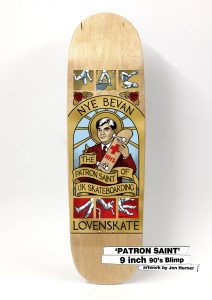 So Jon, your instantly recognisable, often comical & satirical illustrative style has long become a mainstay of UK skateboarding. For the uninitiated, could you pick a favourite project or two from the archives and talk about what makes them particularly special to you?
Way back in 2013 I got to do the art for a collab Carve Wicked did with Carhartt, that was so rad. The project itself was really fun and varied, it included a board, clothes, an art show, a zine and a video. We went to Berlin for a week to film for the edit while the Bright trade show was on and the city was totally taken over by skaters – there were half pipes in boats, Chad Muska DJ sets and way too many free beers. Kind of how CPH Open is now, but with less of a ‘Nike SB stag do’ lads lads lads vibe.
But what makes that project really stand out is how many things I’ve worked on since that I can trace back to it, like a mad Welsh tree that’s grown branches all over the place. I’ve done board graphics for people who were on the trip (Dan Cates, Joe Gavin, Rob Smith and Sox) and I’ve done a few different bits for Carve Wicked and all sorts of fun stuff for the House of Vans (thanks Rob). I met Jeremie Daclin at the trade show too which lead to doing boards and artwork for Cliche and Film trucks. Skating is such a small world…
When designing a board graphic, do you relish working within the size and shape constraints of a skateboard, and how does your approach differ (if at all) from working in more conventional formats?
Oh yeah, I love a challenge! I’m always happier trying to work out something I haven’t done before than churning out the same old thing over and over. Something that’s always interesting about working for Lovenskate is the fact that the boards are all hand screened, so it changes what you can do with colour. Normally things I draw are printed digitally so there’s no limit on palate, but that’s not the case here. But what you lose from having to limit yourself a bit you can make up for in other ways – this board has a lot of gold on it, something that can’t be digitally printed, and the fact that each colour layer is its own separate thing rather than a cluster of CMYK dots means that in person the graphic looks so much more bright and alive. Plus the art of screen printing is so cool and the fact that it’s done by hand means that every board is unique. 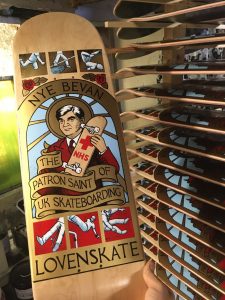 You recently approached Stu at Lovenskate about putting Nye Bevan, the architect of the National Health Service, on a board. Where did that idea come from, and why do you think such a graphic is relevant at this point in time?
Stu and I have talked about doing political board graphics before, it’s something that Lovenskate do really well. We hadn’t hit on quite the right concept, but a little while ago Stu posted on the gram about the time he really messed his hand up (https://www.instagram.com/p/B3AebYUgtZv/) and included a message about how important the NHS is. This prompted an idea I’d had floating around in the back of my mind for a while so I slid straight and true into the DMs. Stu, legend that he is, was immediately keen so I got a rough draft drawn up and we went from there.
The timing couldn’t have been better. We first talked about it at the very end of September, when an early election seemed pretty inevitable – a bit more than a month later the date had been set and the graphic was ready to print.
Personally I think a graphic about how rad the NHS is will always be relevant, but at the moment it’s particularly on topic since this is the election which will decide whether it continues to exist or not.
Do you think that us Brits (skaters in particular) take the NHS for granted?

We skate safe in the knowledge that whatever happens at a session, we’ll get picked up and mended for free by compassionate professionals if things go wrong. Things are very different for our compadres across the pond!
I don’t know if people realise quite how dire the situation is in America when it comes to healthcare. And let’s not be naive, that’s absolutely where we’re heading if we get a Tory government and their version of Brexit. It’s not even a new plan on their part, it was one of the main ideological thrusts behind austerity – underfund something to the point it starts to collapse, say it’s rundown and not fit for purpose and flog it off to the private sector for cheap. “They’ll do a much better job, they’re such smart guys! We were at school together! We did coke off pig corpses on Epstein’s island with them! Great bunch of lads, top bants!”
Seriously though if you follow American politics, and particularly the current Democratic primaries, one of the biggest fights at the moment is between decent human beings who want to introduce medicare for all (a system along the lines of the NHS) and the subhuman scum who are willing to throw their bodies in front of the train to try and prop up a system where cancer can mean bankruptcy, giving birth can come with a $20,000 bill, and people die because they’re forced to ration $200+ vials of insulin that cost $2 to produce.
As far as I’m concerned decent health care should be a human right, and anyone who tries to take away people’s access to it should be treated with nothing but contempt.
Finally Jon, after all that, does politics belong in skateboarding?
Skateboarding is politics. If you’re street skating you’re repurposing a public or private area for the sake of art, public skateparks are paid for and maintained by taxes, at a private facility you’re supporting a small local business. Not to mention the work that charities like Make Life Skate Life and Skateistan do.
I made a comic about skateboarding and politics in Palestine after spending some time volunteering for SkatePal, which was one of the most life changing and life affirming things I’ve ever had the privilege to do:https://www.vice.com/en_uk/article/gq9de9/skatepal-comic-palestine-skating-politics
And ultimately, skateboarders are just another group of people. Every person has a duty to look around them at the state of the world and say ‘am I cool with this?’ and to speak up if you aren’t. Boris Johnson, Michael Gove and Jacob Rees Mogg would rather you shut up, didn’t pay attention and left the important decisions to them because it’s much easier to rip people off when they aren’t looking. When they eventually notice they’ve been robbed you can just blame someone else – maybe piccaninnies with watermelon smiles, tank-topped bumboys or people who go around looking like letterboxes. We’re smarter than that and it’s time to get mad as hell and make sure the good guys win one for once.
History says, Don’t hope
On this side of the grave,
But then, once in a lifetime
The longed-for tidal wave
Of justice can rise up
And hope and history rhyme
– Seamus Heaney
Vote for Jeremy Corbyn… show us how it’s done! #grime4corbyn
– Danny DeVito

‘Patron Saint of Skateboarding’ will be in all good skate shops and online on the 16th December. 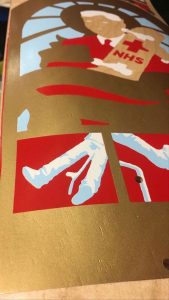