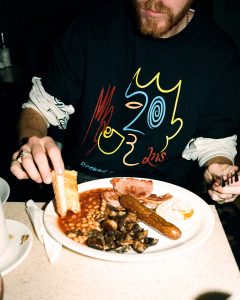 To mark the last of Lovenskate’s 20th Anniversary celebrations this
year, we are proud to release our collaboration with Carhartt WIP.

Carhartt WIP have been longtime supporters of Lovenskate over the past
15 years. From co-creating tea-sets to supporting our video projects
and skatepark builds, from the Isle of Mann to Bangalore.

All the while keeping us head to toe in some solid clothing. This
capsule – including a Beanie, Hoodie and T-shirt – is inspired by
our shared passions, hard graft, and a decent cuppa.

The new ‘Amor y Patín’ boards by Igor Marques @sq666r are in shops and online now.

Massive thanks to the amazing Flamenco Dancer Aitana @aitanasola and Guitarist Matt @butler1234567.

Massive thanks to Nuria Garcías at Escuela de Baile for her choreography, her time and her studio.

Filmed and edited by Stu Smith 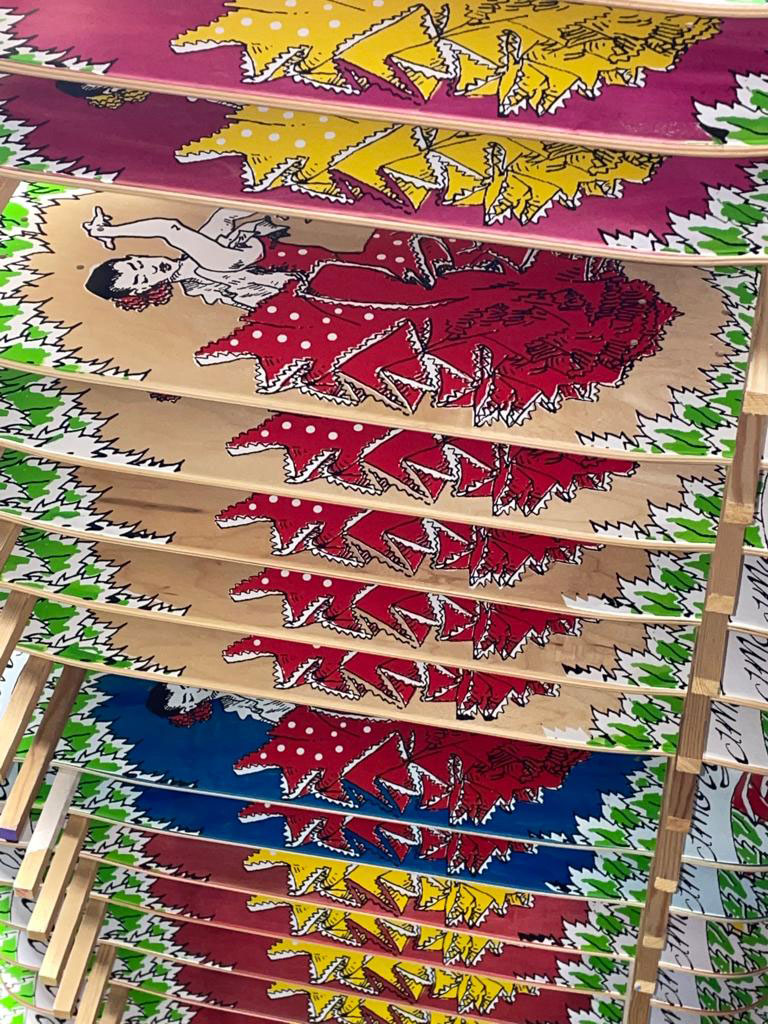 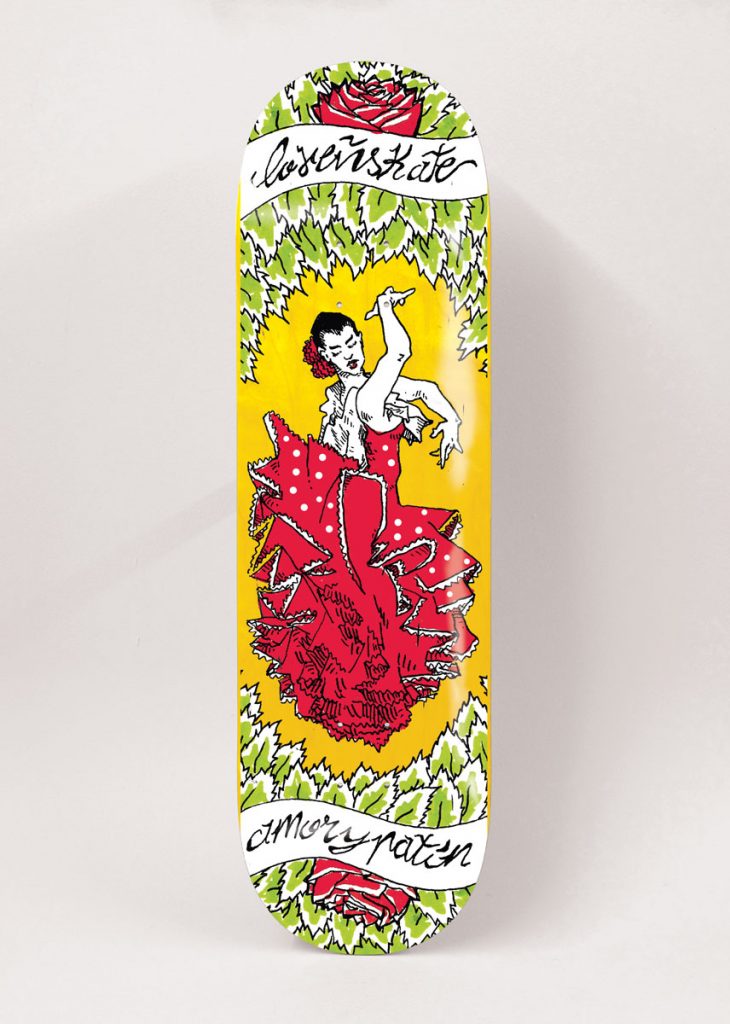 I sat down with Eloise Dorr, artist and one of the creators of the latest Lovenskate collection. We gently unpacked the world over breakfast and a cup of tea. We discussed the finer points of veganism vs personal health, the optimum consistency of egg yoke, spontaneous charity shop shopping, the topsy turvy world of tea served in a glass, and then we got down to the Art.

I’d first had the pleasure of printing Eloise’s work around 8 years ago as part of a challenging print series of boards for Vans 50th Anniversary. 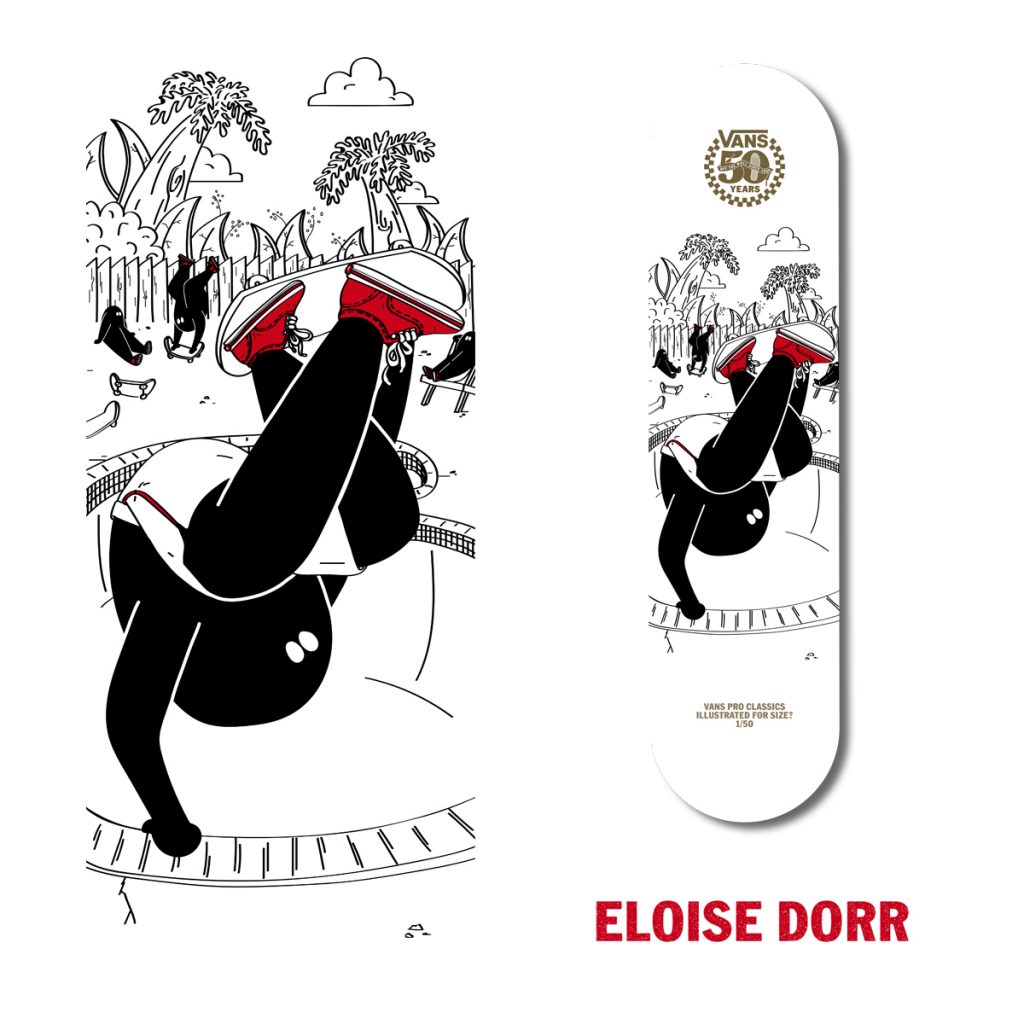 “Eloise! We have known each other for a long time, in fact, a board you designed for Vans was my daughter’s first ever skateboard, she printed it and gripped it at House of Vans”.

‘Well she is, but she confessed to me the other day that she doesn’t think she’ll ever be a good skater because she’s “Quite sensitive to cuts”’

‘Girl after my own heart’ replies Eloise.

Eloise has been skateboarding for 10 years, but says she is way past the days of throwing herself down stuff. She still skates regularly, but describes herself as someone who doesn’t push herself past her limits. She says that in the past, this made her feel like she’s ‘not legit’, but, now she is ‘old’ (her words) she says she no longer gives a shit. “I don’t care, I’m happy at the level I am, but I haven’t been skating as much lately as I’d like”.

I asked her if the two things go hand in hand: when she’s productive painting she skates less. I thought maybe she worried that injury might stop her painting. “It’s actually the opposite…2020 was my most productive year … companies needed more content for social media and promotion…it worked out well, at least for me. Skating has always gone hand in hand with art, so if I’m feeling really creative, I’ll want to go out and skate more. This year has been a quiet year for work and so it’s given me less motivation to go out and skate”. As an artist coming up in an industry where things come pretty easy: shoe company budgets for exhibitions, skate trips, paid-for ways for us to showcase our talents etc, lately these assumed perks seem hard to come by and it feels like something of a comedown for everyone. “It’s tough out there. Covid made everything seem sensational, and so different, almost novelty. Now we’re paying back the grants, in effect paying for that time off. We managed to find an extra energy to deal with covid, that’s worn off and now we’re all a bit exhausted.”

Eloise quit her job 6 years ago to become a full-time illustrator, not wishing to compromise anymore, and do a job she dislikes. As anyone who has ever turned their passion into their job knows, you sacrifice a certain amount of creative freedom to meet deadlines, pay your rent and maintain an income. I asked her if this had changed the way she makes art, and if Eloise has an antidote for this so she can still enjoy the creative process.

“I’m not living a lavish life, but I’d rather be living cheaply and do what I love. When I first started I was making art because I really loved it, and I was filled with so much passion. This might have been before I moved to london and had my soul stripped away”.(She laughs). “I’m not saying I don’t like painting anymore but social media has changed it so much!”

Her first creative platform started out on Tumbler, which to her felt like a community where she could share work. Now that instagram has taken over, for her, creating work just to ‘post’ feels like a bit of a drag. This is typical of artists in any field, who feel that instagram doesn’t show the value and the time taken to create real art, and that it can easily become lost amongst the torrent of cute cat and bike crash videos. “I miss Tumbler” she says, likening it to trading chickens down the local market. Due to illness, Eloise left school at the age of 16, and having painted her whole life, but with no obvious direction, and away from the gallery walls of the classroom, Tumbler saved her. So is there an antidote to the social media black hole? Eloise is sure there is, but to a point. For her it’s her sketch book, doing non-skate related work, and Procreate, which she says has brought some fun back into art.

“When I haven’t enjoyed painting, Procreate feels like a game, I can create something just for fun, and quickly, this is my non- pressured creative outlet. I always have such a strong passion for skating and art, but if I do have an antidote to the madness, it’s this: if I have a day to myself, then I’ll go to the National Gallery and go to the Impressionists section. And if you find me there I might be sobbing. A kind of release. That room makes me well-up!”.

Maybe, when artwork is on the walls, you are present, you can take your time, there’s limited distraction, and if something peaks your interest, it is there physically for you to digest in your own time. Instagram craves that you scroll on, and even if moments later, something did move you, the chances of you finding it again can be arduous. However, even Procreate and galleries have their limit, she says this is far from the perfect antidote. That’s the reason she is where she is right now. What with Covid and financial uncertainty, 2022 has been her least productive year for painting, and for skating. As a result, Eloise is having a hiatus. Instagram could be the greatest marketing tool ever, but it’s a double-edged sword, and as the algorithm evolves into an ever-more complicated beast, it has become hard work for people to promote themselves organically. We briefly touch on a conspiracy that Facebook are deliberately controlling the ‘likes’ so people are forced to try harder and post more, thus feeding the machine and demanding more engagement, and then she boldly states that she’s going to do the opposite. Not bothered by wavering followers, she’s decided not to cave to the pressure, to keep her art sacred, not spend weeks on a painting only for it to be on insta for people to very quickly digest it and move on, or maybe for it to go unnoticed completely. I ask if she thinks there is a relevant space that exists outside instagram for her, or do we all surrender to it and let it eat is up?

“Creating work for an actual exhibition feels so much better in the same way as creating a skate video for a premiere, not just a clip for instagram. My favourite work to do is collaborations and shared projects, to create together. It just seems like sometimes (with instagram), it’s like throwing it all in a bucket, rather than something to be celebrated. If you’re not using it like many are, then what are you doing? All that effort and it doesn’t go anywhere”. 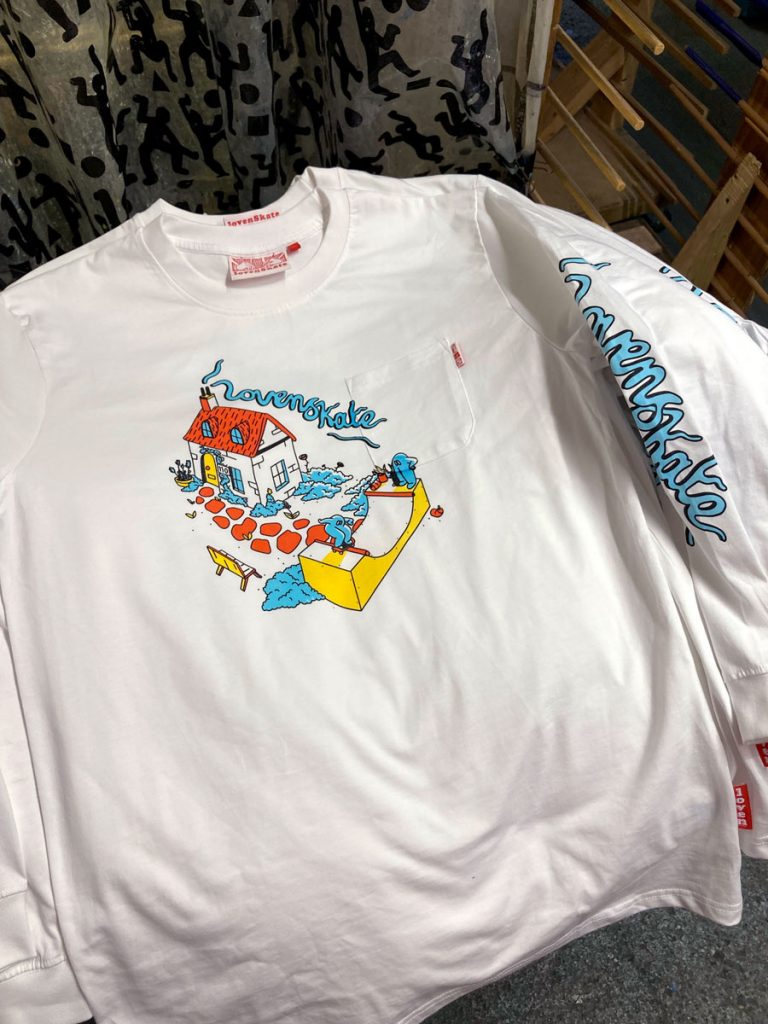 ‘A slice of Utopia’ by Eloise Dorr for Lovenskate

I had one final question, maybe a cliché but, I was interested in her answer considering she’s been so honest about how it was sometimes a struggle living life as an artist.

“Eloise, you’ve been a professional artist for 10 years with a recognisable style (she’s modest about how many people have tattoos of the characters she draws). What advise would you give for anyone starting out. Especially as you’ve seen some ups and downs”.

‘Finding your uniqueness is key. It’s ok to copy people’s work, as a way of learning a skill, in the same way as when you learn an instrument you start by learning other people’s music. But, don’t trace other people’s work and put it on social media as your own!”. For her, studying the work of the Impressionists was a way of understanding colour, and light and shadow, and although she has moved away from the impressionist style, Light and shadow is a defining element in her work. “I didn’t ever foresee me having a down period because my career so far has been growing every year, so i thought ok, this is the trajectory. It’s a REALITY check right now, that it can just stop at any moment. And I’m not saying that it won’t pick up again, but it’s definitely humbling, and a big realisation that it (the art world) is so fickle. It does take a lot from you, but it does give a lot back as well. I know us artists are supposed to hate our work and that sort of thing but, sometimes you do make something and you’re like, OH MY GOD I LOVE THAT!, and that has given something back to me, and I’ll take that! ….That’s why I did the illustration that I did! ‘Just give me a slice of utopia!’ It’s been a shit year, just give me some peace, friends and skating”.

Eloise has become cynical this year, but that isn’t stopping her. A bit of cynicism doesn’t hurt an artist, it’s those emotions that make true art. 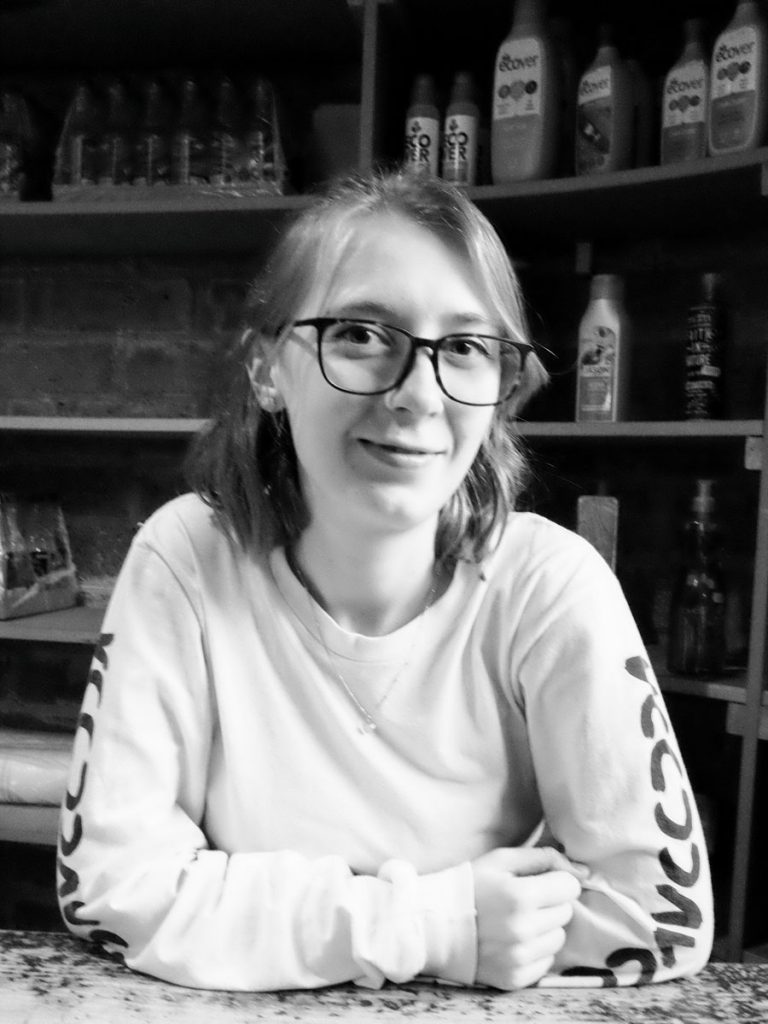 The brilliant FOTTA returns, with the best of Italian creative skateboarders, including our boy Schianta. Video was shot and edited by Alberto Della Beffa and the music is by Julien Papen.

We are proud to present a new collaboration with the mighty CHPO. The greatest pair of shades ever created!” These ‘SUNNY SIDE UP‘ glasses are made using 100% recycled plastic, with blue reflective lenses, which means your friends can see themselves looking incredible in one of our shirts

A great video from the brilliant FOTTA.IT featuring a host rippers, including Schianta!!!