Posted at 23:05h in Interviews by Stuart Smith

A couple of years back, we took a life changing trip to Nepal on a skate tour to donate some equipment to the thriving skate scene out there, promote skateboarding, and explore this beautiful country. The idea for the trip was born out of a conversation with Skate Nepal Co-founder Daryl Dominguez (Daryl runs the organisation alongside the mighty Tom Delion). Our boy Aaron Wilmot caught up with Daryl about what he’s been up to, what its like to skate in Nepal, and whats in store for the future of the organisation. 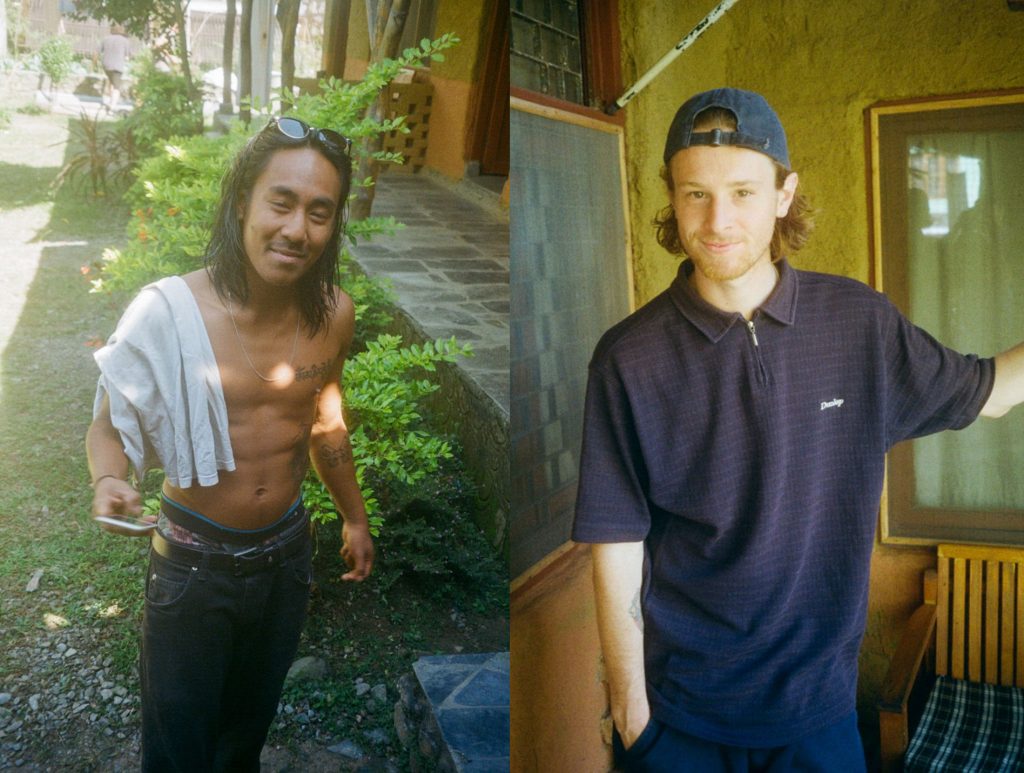 How did you start this Daryl, first thing you did to get it rolling?

Man, I’ve told this story a lot, but in short, Skate Nepal materialised out of a strong realisation and willingness to share my own blessings in a place that had already captured my heart. As soon as I connected with that source that magnet went full attraction mode and everything, in short, blossomed organically. From where I ended up, to the people I met, the situations I ended up in, absolute chance encounters… It really is crazy in hindsight

You’d been a few years now, progression must be enjoyable to witness from the skating and the place compared to years before?

Yeah man its incredible, the whole landscape is constantly evolving. Two skateparks now, a skate shop, so many skaters… Not to mention the ability levels, level of progression. Sure enough this is amazing but they’re proper skate rats, always out, filming stuff, making edits, you can see the love and the joy they’re having. Big crew’s spread over three cities/towns. A lot of them have even travelled through skateboarding, skating comps and events in India and Asia-wide. Some of them even made it to Europe! Words don’t do it, over stoked. 110. A lot happens in 4 years. 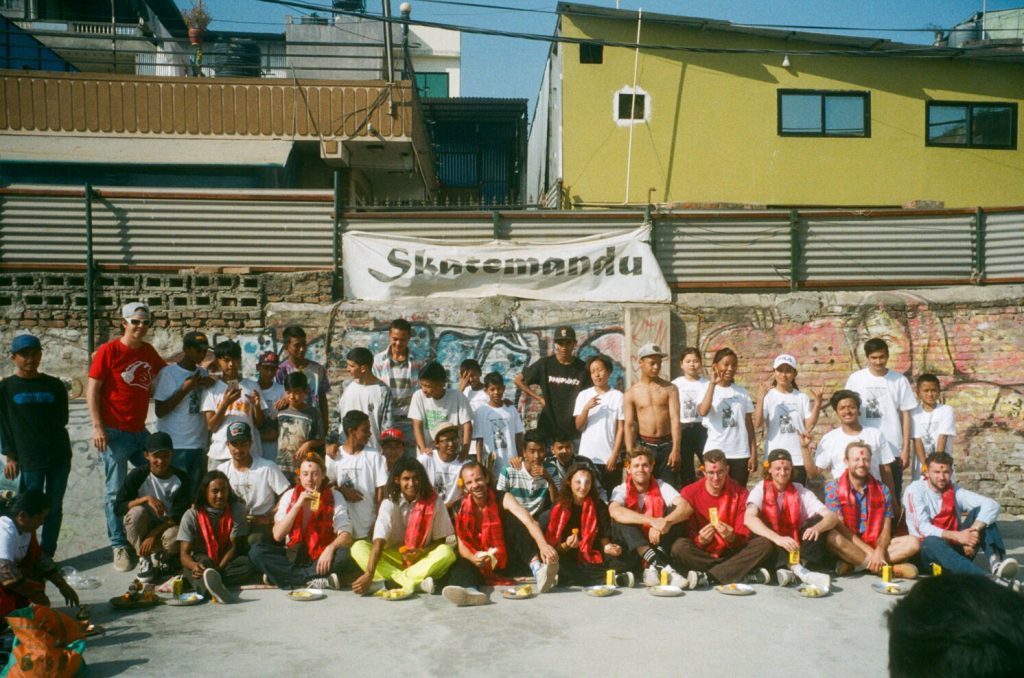 Our welcoming party at Skatemandu skatepark

How did someone of the kids know how to pressure flip?! I was shocked.

Good question! No idea, probably youtube… Maybe I had something to do with that come to think of it…

We covered so much ground, was that as easy as you made it look to organise, the Nepali rum didn’t effect our directions to badly!?

Kukri rum has never let me down so far haha. Jheez, a lot of ground man, ends of the country and then some, long overnight drives, through beautiful landscapes, mountain passes 8 feet wide with no guard rails, nothing stopping you from falling into a canyon, overtaking on bends, hectic. From Himalayan mountain towns to dry plain safari’s in Chitwan – In the hills one day, 10 feet away from a Rhino the next. 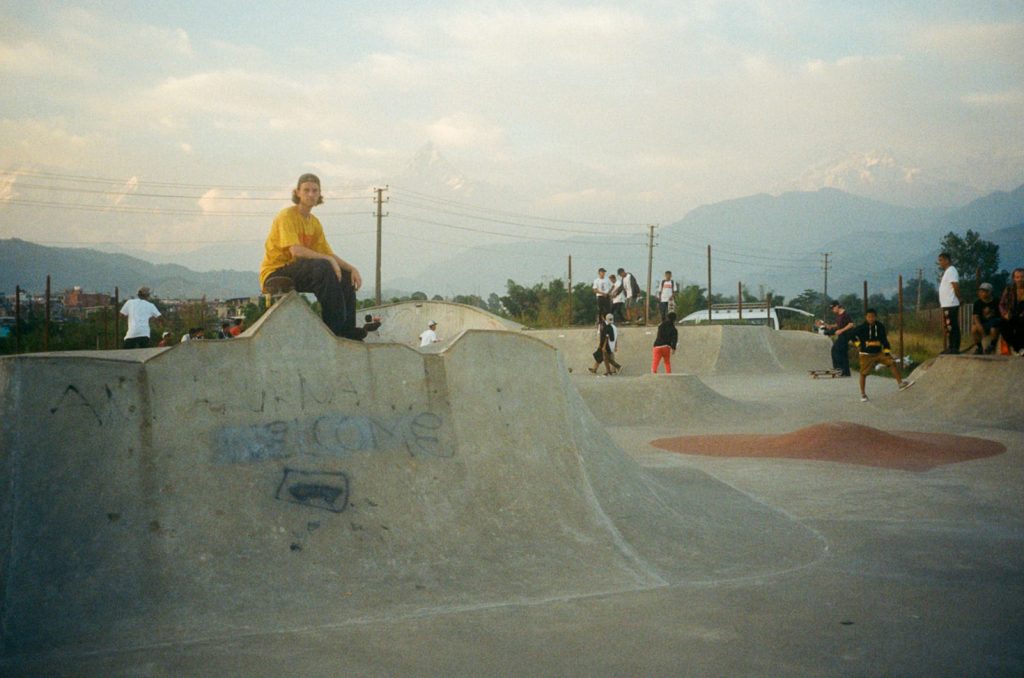 Tom Delion at the Annapurna skatepark in Pokhara

Was that the first time you’d done that with a crew that size there? Hit me with the list of names? 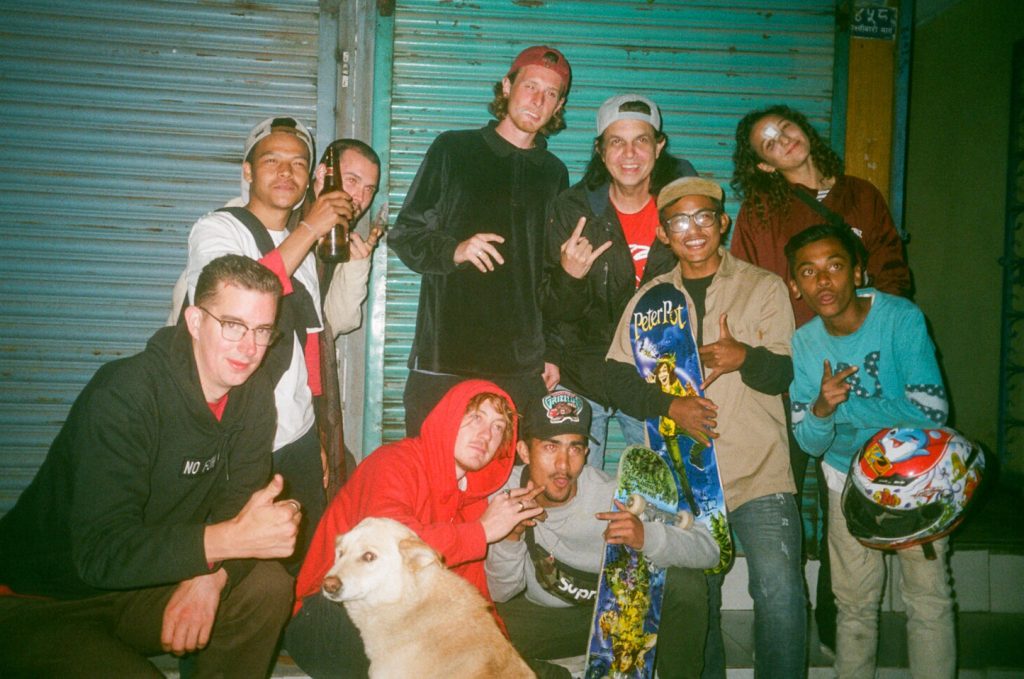 Kathmandu nights with Kukri Rum and the best crew

Because of that, did it make for fun times in the long bus journeys!?

You bet, durry flips, Kukri rum, endless conversation about every facet of existence you could possibly cover, real good times.

How sick was bombing the hill and everyone was coming out to check it, all the kids wanting to use the boards! That happened most places we’d go, few rippers out there!?

So sick. That particular day and that hill bomb mission in Bandipur is what I’m talking about man, those kids had never seen a skateboard before, it connects you with that feeling of excitement you get as a kid. It’s all about nurturing that, connecting or reconnecting with that, sharing that…

Why is Samu so great?

Easy. Nigel Hesburger is always up for boundary exploring conversation, he is naturally pretty open which means he doesn’t judge and will always consider and try and understand different view points. His intentions are always wholesome and compassionate and his sense of humour is incredibly Swedish. He shreds so good too. Sambo also looks great with face camo and nobody’s head looks better photoshopped onto a monk or buddha than his. Ommmmmmm 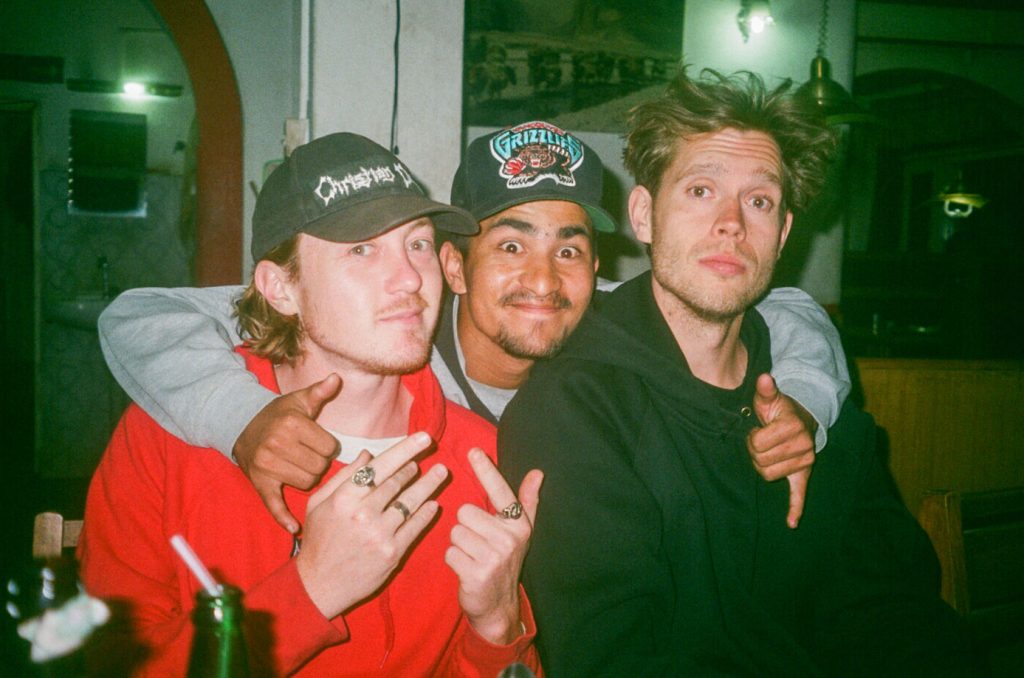 You punching Alex in the head with a motorcycle helmet on in that bar in Kathmandu. 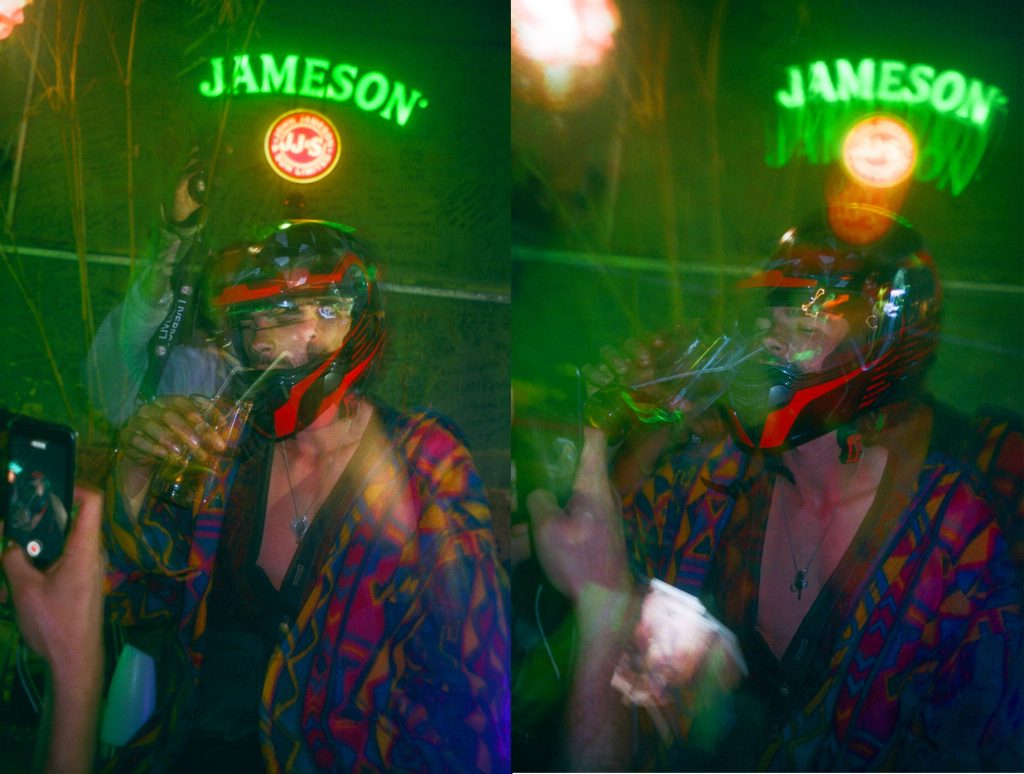 How did Helena become the human helmet?

Oh man. Big up Helena man, she’s the undisputed queen of the people. Tom hit her in the head with his board basically. Not on purpose obviously, we were skating a rail at this temple. Tom tried to taildrop off the top step, somehow landed with one foot on his tail and the board went on a freak medieval catapult mission, flew, no shit, about 20 feet and hit Helena square in the face. We had to take her to the hospital to get stitches. She then tried a trick for 2 hours that same EVENING straight out of hospital with a bandage over her eye AND did it! Then the next day she taught girls at the park and killed the demo. Seriously, you better bow down.

Finding spots was a challenge?!

In crust we trust haha. I knew what to expect but yeah, the crust and dust was so challenging, plus the cow literally taking a dump on the run up. Gotta hand it to the kids skating out there right now, skating those spots with no problems. 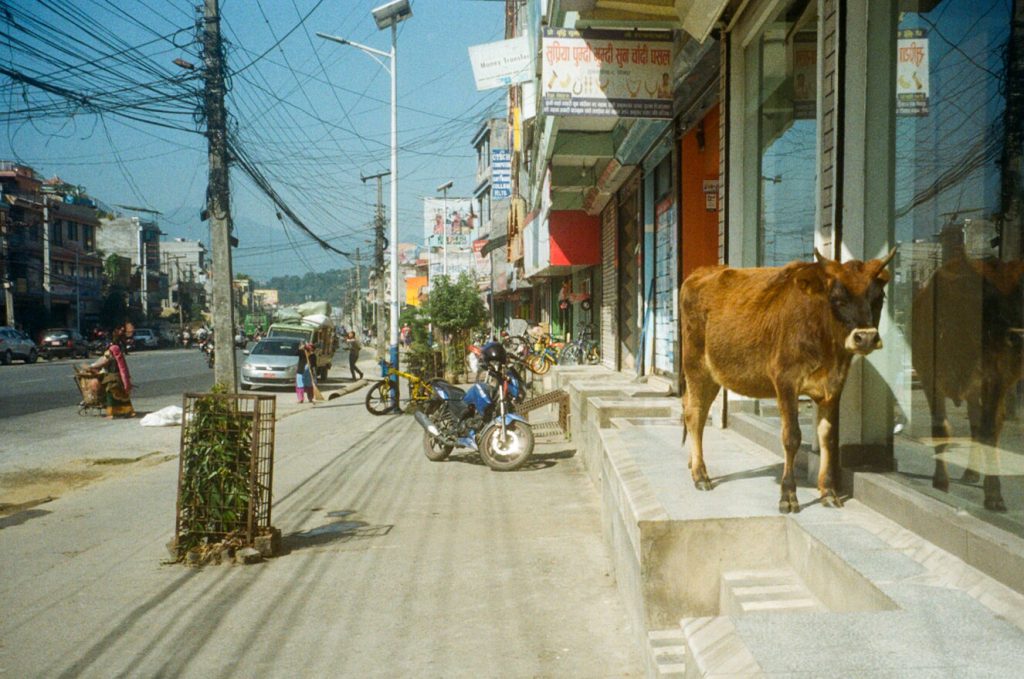 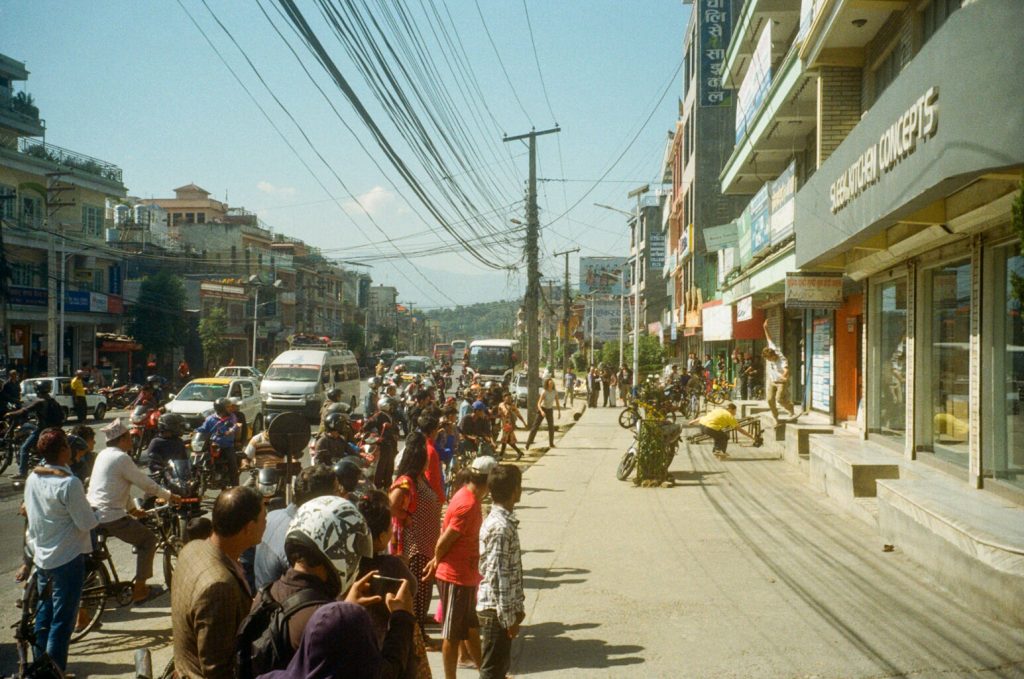 Samu – Gap to Backlip. Drawing a busy crowd in Pokhara

How much did the lads go mad for the fake north faces?

When are you going to try to go back?

The Annapurna skatepark in Pokhara is getting an extension by MLSL alongside some amenities – we’re planning for sometime around April but unfortunately there’s plenty of complications. Nepal wont let anyone from the UK in the country atm and I’ll be fresh out of ankle surgery so its tough. I might not be able to make it. Basically, as soon as I quite possibly can and legally too, I suppose.

Why are they trying to take away the park?

It’s complicated. There are some land lord/renting issues we’re trying to resolve and mainly due to Covid and it having to close for 6 months, it’s been really hard to sustain financially because of this. We’re crowdfunding to solidify the skatepark financially for a year or even two. Once that is achieved its just resolving the residual complications which might take some time. 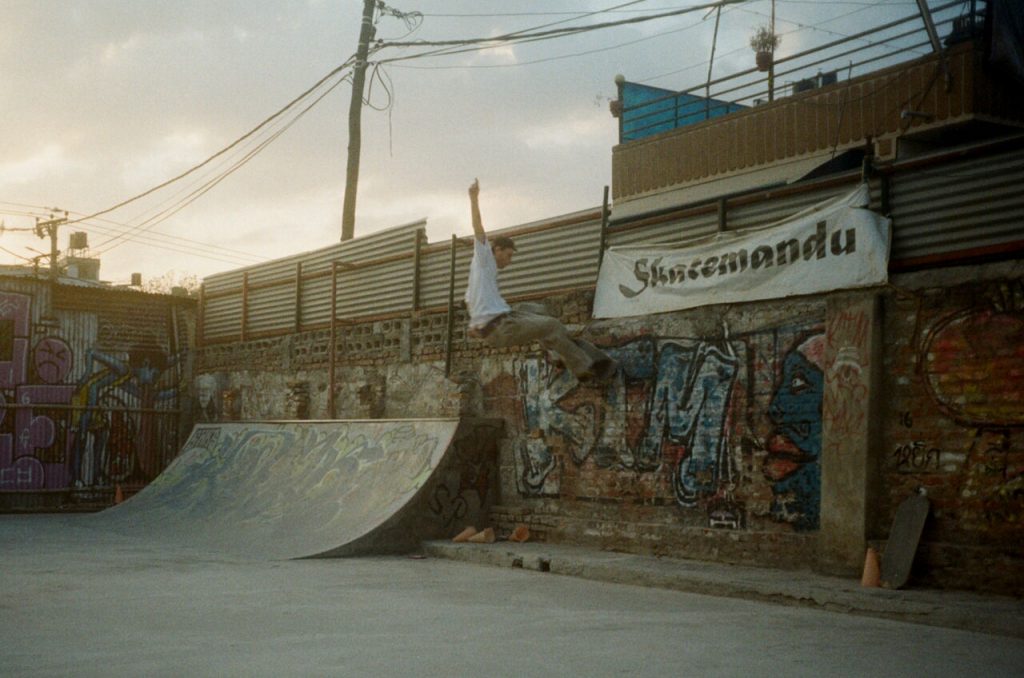 What can we do to try help from here?

Cop any of our merch or donate via the Just Giving Page. Dhanyabad (Thank you in Nepalese). 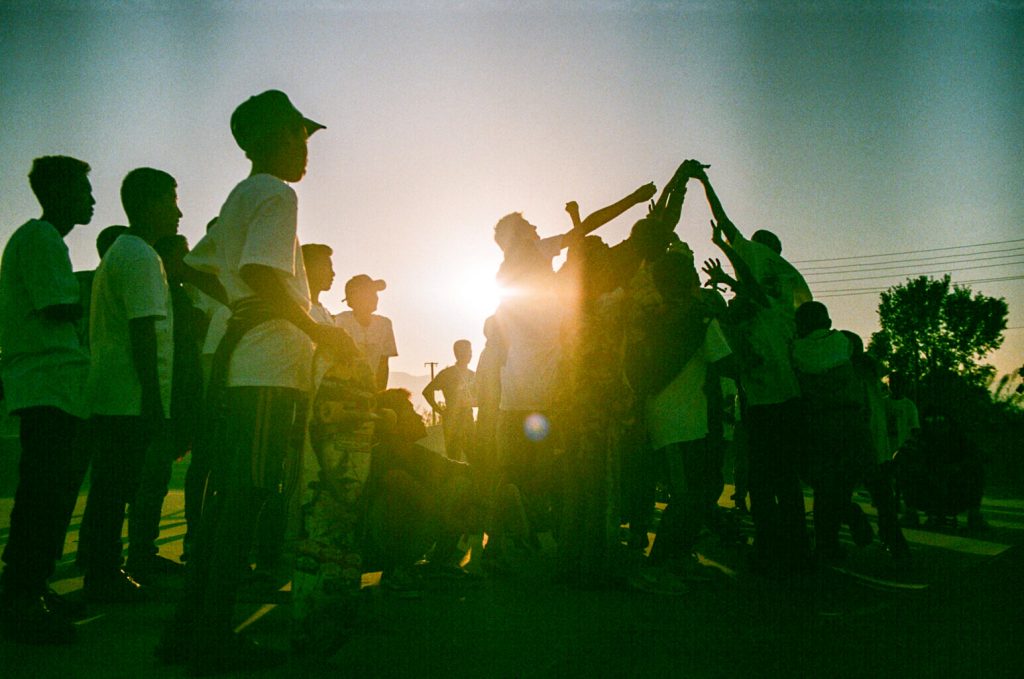